There Be Dragons Here 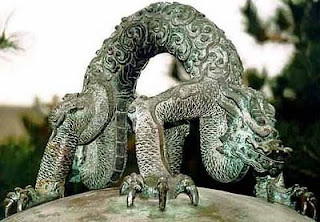 I recently watched an old Star Trek episode on my computer, a marvelous thing in itself. In this story, the crew of Enterprise battled a race of nasty reptilian creatures bent on destroying Earth.

From a mythological and psychological point of view, the alien reptiles confronting Commander Archer represented his own primitive nature. Deep in the brain's cerebrum lies an area known as the limbic region, an early part of our evolving brains. Also called the reptilian brain, this area is thought to control our baser instincts - eating, procreating, desires, and fear.

In Western myth, the dragon has come to represent those unconscious parts of us ruled by ego, fear and desire. When we finally slay our interior dragons, we are able to embrace a whole Earth view, free from narrow self interests.

While artists cannot solve the world's problems, we can certainly change how we live in it, and that is an important and courageous first step.

I stand before my easel staring for a long time at a work in progress. Then slowly, by fits and starts, something important begins to emerge from the mass of line and color. At those rare moments, while in the midst of creating works of art, I completely ignore society's demands. All petty desires vanish and I fear nothing. At those times, I feel like I have eaten the dragon.
Posted by Unknown at 6:30 PM 5 comments:

The Magnificence of the World Amazes 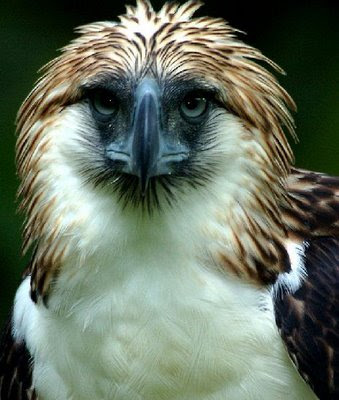 The remarkable Philippine Eagle has a seven-foot wingspan, yet can maneuver through thick jungles in search of its main prey - monkeys. One can only stand in awe of such a fiercely beautiful raptor. No art work could possibly improve on this natural creature, but I am willing to try.

Posted by Unknown at 1:41 PM No comments:

Do You Know Art When You See It?