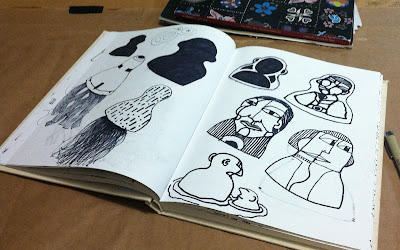 Last Friday for a large part of the day I got to hang out in the Imaging Center of Moffitt Cancer Center in Tampa. I had come with a friend who was scheduled for two MRIs. Anticipating a long wait, I made sure to bring along plenty of snacks, some illustrator pens and a well-worn sketchbook.

The waiting area filled up quickly with mostly older couples who busied themselves reading, texting, watching tv and in one case knitting. Then a young Spanish family sitting in the corner caught my eye. A thirty something husband and wife with two children, I figured they were waiting on an older relative, perhaps their abuela.

I was surprised later when an assistant called the husband in for an MRI. And shortly after that my friend got called in for her own tests.

Faced with several hours of wait time, I settled in as best I could, took out my sketchbook and began to draw. It didn’t take long before the two children took notice. They stopped chattering, put down their I-pad and began staring at me. The longer I drew the more curious they became until presently, the brother, the bolder of the two, moved to a closer chair with his sister soon following.

As I continued drawing, their curiosity could not be contained. In order to get closer, they soon took seats directly across from me. I kept drawing for a while longer until growing hungry; I closed the sketchbook and decided to check out the Center café. The children’s smiles changed my mind and on a whim I held out the sketchbook to them.

“Oh yes!” answered the brother and he and his surprised sister thus began a delightful journey of discovery through a year’s worth of my sketches. When one or the other came upon a drawing they especially liked, the sketchbook was held up for their mother to see.

And with that unusual introduction all of our imposed reservations soon evaporated. The boy asked if I was an artist. Did I go to university? He told me that his mother’s brother painted pictures and he and his sister once took an art course back home in Puerto Rico.

By then I had become encouraged and started asking my own questions. What were their names? Were they visiting Florida on holiday? Had they gone to Disney World? The sister, Malaria, spoke little English so younger brother Gariel became translator for both of us.

They were refugees from Hurricane Maria and had come to Moffitt from the little town of Trenton west of Gainesville. Before that they stayed for a while in Ocala and before that Orlando. They liked Florida but were eager to go back home.

At that point, Malaria retrieved her I-pad and with new found courage began using the pad to ask questions.

“Do you draw the colors?” “Do also you paint the pictures?”

Through the genius of technology I showed this inquisitive girl my web site and videos. As image after image scrolled across the screen, Malaria and Gariel became more excited, pointing at their favorites and holding up the I-pad again for their mother to see. Now she too seemed more relaxed and after a while joined in the conversation. Finally I felt comfortable enough to ask a question that had been on my mind.

“Is your husband ok?”

She spoke at length to Gariel who then turned to me and repeated one word, “Tumor.” His mother pointed at her head and nodded when I asked, “Brain tumor?” In the most convincing voice I could muster, I told her that her husband was in the very best medical facility and not to worry, he would be fine.

The conversation trailed off after that and all of us sat in silence. When their father finished his MRI and returned, Malaria and Gariel were quick to show him my sketchbook, occasionally stopping to point at me.

As they turned the pages together, I marveled at how, for a short time, art had been able to bring strangers together. That refugee family had been through so much sadness yet I could see what a strong bond of love they had for each other. Would Malaria and Gariel still have their father’s guidance as they faced the difficult task of growing up? Would his wife have the privilege of growing old with her loved one by her side?

Their long ordeal over, the family gathered their belongings and prepared to leave. A sadness swept over me and I searched for comforting words to say before they drove back home. No words came. 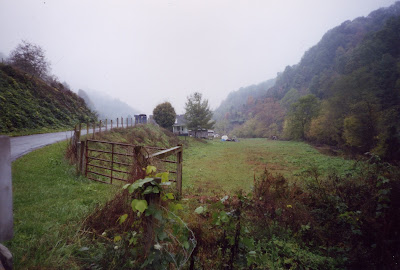