Beauty In The Beast 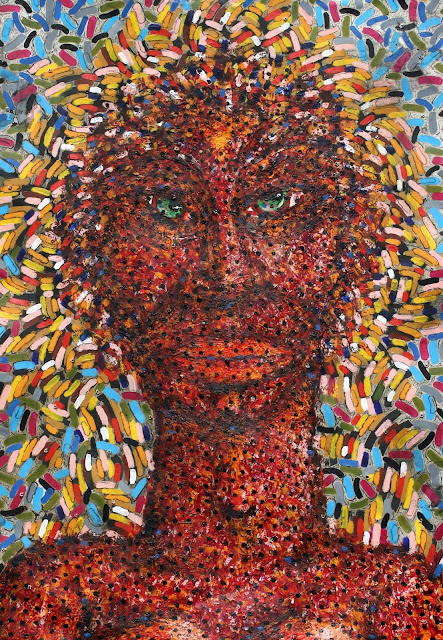 This is the post where I finally convince myself of the beauty of one of my latest art works. The painting, titled “Dark Goddess,” is included in a Florida Artist Group exhibition in Sarasota, judged by well-known painter/printmaker Tom Nakashima. During his introductory speech, Nakashima shared with us the fact that he never assigns deep philosophical meanings to his work before or during the creative process. Only later does he wrestle with the piece’s significance for him. He added that with the passage of time and circumstances, people’s views of his work may change, but those various meanings would remain as valid as his own.

I had, for a long while, been steadfast in my ambivalence toward “Dark Goddess.” At different times in its creation, I had been repulsed and then attracted by the figure’s brooding presence.

The eyes were set too close together, the mouth too large. The hair, if it could be called that, seemed to jump off the head or later retreated into the background. At those intervals, the piece embodied pure ugliness to me. I stayed out of her sight for days.

Persistence, in service to a learned work ethic, always drew me back. What would happen, I wondered, if a stylized black veil were placed over her face. Would a lighter background make the figure stand out more. At one point, in desperation, I even poked holes throughout the thick paper.

Gradually, working on the piece, I began to see something resembling beauty in parts of the whole- the impasto of buttery oil paint next to transparent acrylic passages. Scrumbled lines competing with blocks of color, and just peeking through, the original black ink outline. I became enthralled by the lush physicality of paint.

A deadline forced me to stop and with trepidation the piece was signed, sealed and delivered, not to be seen again until opening night.

Viewing “Dark Goddess” in a large gallery after listening to Mr. Nakashima, I realized I had mistaken ugliness for fierceness. My thoughts flashed on those fierce Fu Dog statues guarding Chinese temples. I remembered black and bloody Kali, Hindu goddess of death and destruction. The ancients knew one does not confront monsters and demons with puppies or pretty girls.

Driving back in darkness over the Sunshine Skyway, I tangled with the idea that “Dark Goddess” represents the terrible fierce beauty that protects us against life. Now I am convinced of it.