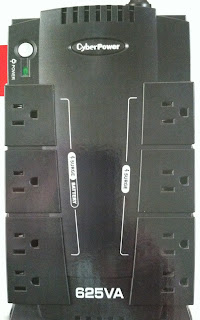 See, the rain in these here parts isn't the ordinary "Better take an umbrella honey" variety. The wind from one of our monster thunderstorms would rip that sucker right out of your hand. The rain itself is so vicious that getting caught in it will leave one with black and blue marks. And no puny power company can compete with the awesome energy generated by hundreds of our lightning strikes.

The results the last few days have been intermittent afternoon power outtages as storms rolled through on their way to the Gulf of Mexico. Even a one second power burp will cause my pc to have a hissy fit and refuse to speak to me.

Yesterday, after two reboots and profuse cursing, I decided to join the 21st Century and buy a battery backup. That decision meant I must go to the one place I had sworn never to re-enter - Best Buy. The last time I was there, I got lost in the parking lot and a Boy Scout had to escort me to the entrance. Once inside, one of the many smiling Geeks fleeced me for my entire savings account.

This time was different though. The young smiling salesman was delighted to show me the 625 volt SX625G CyberPower Battery Backup. It was, he allowed, the best model for my pc needs and assured me of its ease of installation. "These newer models don't even need software," he said grinning. "It's easy! Just plug it in and you're all set."

The easy part turned out to be the simple task of opening the glossy theft-proof box. I managed to cut myself only once and hurried to read the directions before I passed out from blood loss. As my vision blurred and head spun, I looked in vain for directions I could read. There, under Spanish, Croatian, and Hindi directions, I found English. I felt woozy as I read the first direction - "Caution, this unit must first charge for a minimum of 8 hours." "Klunk!"

Posted by Unknown at 2:48 PM No comments: