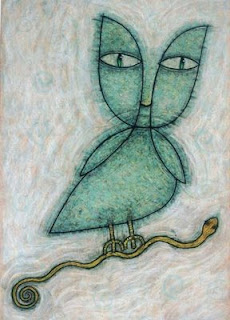 This mixed media work-on-paper is part of a group that I rescued from the horrific Imago Studio fire last December. After conserving and, in some cases, elaborating on the pieces, the art was archivally framed and placed under uv glass. These are the last works of their kind from the years 1988-2007, and will be offered for purchase at a considerable saving. PayPal is also available. Please contact me at mrcoolink@ij.net

More art available for purchase can be seen at my web gallery, Denis Gaston Art
Posted by Unknown at 9:46 PM 1 comment: 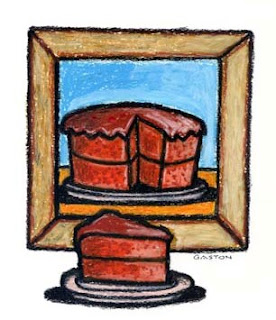 The other day I got a craving for a bowl of ancho flavored chicken posole washed down with a cinnamon dusted horchata. In all of my “you can do this but not that” mental games, eating great spicy food trumps everything.

So I hurried over to my favorite Dunedin restaurant, Casa Tina on Main Street. Grabbing a vacant window seat, I mentally prepared myself for the feast to come. A waitress I hadn’t seen in a while came by, and, after the customary chit-chat, asked if I wanted my usual, “The Starving Artist Special.” Hearing those words again caught me off guard. Staring in silence, I finally shook my head no and looked down at the menu I knew by heart.

In my many years of eating there, I became known as the artist who likes “The Starving Artist Special.” OK, what’s not to like about a delicious plate of frijoles negras, salsa, and rice with a side of chunky guacamole. Right there you have your three basic food groups, plus complete proteins, carbs, and fats. And I could get all that great food for six bucks.

It was the clever title that annoyed me and no amount of friendly cajoling would get the owners to change it. My stories of eating three meals a day and sometimes not even cleaning my plate could not dissuade them. The Starving Artist Special remained on the menu.

If truth be known, it was most likely artists who began using the term “starving artist,” probably in an effort to drum up more sales at the world’s first outdoor art show. We are often our own worst enemies. It did not take long for an amused public to add “starving artist” to their lexicon of marginalizing expressions. “You bohemian, self-indulgent, unconventional hippie! You starving artist!”

In a culture that considers art a luxury or does not take its creative class seriously, making a decent living will always be difficult. That does not mean artists are starving. Like many people, artists have learned to live within their means and use their creativity to fashion a rich and satisfying life.

Artists, who live life out of their own center, and have a vision they are able to create every day, could be said to be the most well fed of people.
Posted by Unknown at 10:51 PM 3 comments: 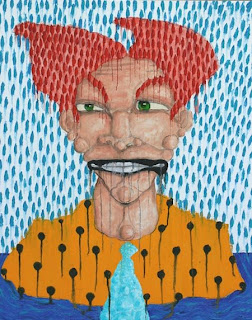 In 1886 Italian circus performer Paulo Duccio, like millions of other Europeans, immigrated to America. Unable to find work back East, he finally wound up in St. Louis, broke and desperate. That city had become the official gateway to the new West, and the train station was the point of departure for everyone bound for California. Duccio figured it would be the perfect place to hustle spare change.

As he had done many times before, the veteran carny reached into his bag of tricks, and this time pulled out a clown. Dressed as a bumbling aristocrat, he was an instant hit on the station waiting platform. Weary travelers loved his disappearing tricks and slap-stick comedy; loved him enough to throw a few coins into the stove pipe hat he passed around.

The railroad company hired Duccio to perform at shareholder meetings and employee functions. Performing in halls all across the Midwest, the clown gradually took on the role of court jester. Dancing and cavorting in total silence, he became Punchinello, the fool.

After every performance, with great fanfare, he produced a gilded hand mirror from his baggy trousers. Staring intently at himself for a few seconds, the clown suddenly burst out laughing. Then, slowly shuffling through the auditorium, he showed people their image in the mirror. The clown clearly enjoyed this burlesque, and his infectious giggle soon had the shareholders chuckling too. Many saw in the mirror that they also looked foolish, yet all chose to join in the charade.

The clown’s performances injected levity into the serious business of making money, and he found himself in demand for other corporate meetings. Famous at last, he started wearing his Punchinello costume everywhere. At restaurants he sat at special tables, and ate in silence, as patrons laughed and applauded. People recognized him on the street, men tipped their hats.

Over time, he forgot his other self and could often be seen at home in the evening reading his paper, dressed as the clown he had become.

One hot Fourth of July, the clown was hired to provide laughs at an outdoor rally for railroad employees. This time, however, he had a different task to perform. A tiny platform had been constructed high above a great wooden barrel filled with water.

For his part, the clown must somehow climb a flimsy rope ladder to the platform and, after much melodramatic hand-wringing, jump into the water forty feet below. His practice leap had ended badly when he injured his shoulder on the barrel’s edge.

The afternoon performance arrived, and the clown was understandably anxious. Clinging to the swaying ladder and unsure of himself, he sweated profusely in the blazing sun. After much effort, he pulled himself onto the platform and stood, eyes closed, shivering in the Midwest heat.

With a crowd cheering wildly, the clown inched his oversize shoes to the platform’s edge. Sweat stung his eyes, and he felt like puking. But there was no going back. Duccio was the performer. So he jumped.

Down and down he plunged and every mother and every child gasped in astonishment. In a blur of color, the clown hit the water, a warm spray splashing the circle of excited onlookers. He surfaced, waterlogged but alive, and checked to see that all parts were accounted for.

Under a darkening sky, the clown treaded water and marveled at his good fortune. Everyone moved forward for a better look, not minding when the skies finally opened, and it rained hard like on a Kansas corn field summer’s day. Not one person walked away.

And then a peculiar thing happened. All the rain, and water, and sweat began to have an effect on the clown. His gaudy grease paint make-up puddled and ran. His bulbous rubber nose slid off into the water, followed by fuchsias and yellows and blues.

The crowd stared in disbelief, as the clown slowly washed away and someone else emerged, someone altogether different; a pink incredulous old man. From somewhere deep under water, a shiny mirror found its way to the surface. The man held the mirror up and gazed, unbelieving, at his reflection.

Lifting his eyes, he looked out past the people and railroad tracks, out beyond the rows of tasseled corn to a spot on the horizon. A fierce rain pelted his face, but he continued gazing into the distance. Now, as the mirror fell from his gloved hand, the man gave a barely audible sigh and slipped beneath the rainbow waters.
Posted by Unknown at 3:44 PM No comments: