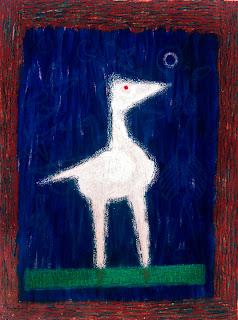 After a hiatus of several months, while we employed damage control, the Imago Art Group has finally opened its new studio doors. Working in a large space, graciously provided by the City of Dunedin, the artists have, once again, begun their monthly First Friday open house. On May 2 the public will have the opportunity for a close up look at the creative process, an endeavor neither boring or glamorous. The business of art making is a daunting challenge, but ultimately a very fulfilling one. 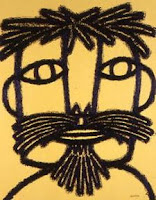 One of my favorite musical groups is the Brazilian percussive ensemble Uakti. Classically trained, they draw inspiration from the rich and varied cultural traditions of that country. The name Uakti itself comes from a fantastic legend of the Amazon Tucano people.
Uakti was a monster with several holes on his body. When he ran across the forest, the wind passing through his body made wonderful sounds. Upon hearing the hypnotic rhythms, the Tucano women were drawn into the forest, where Uakti seduced them. The men became jealous and hunted and killed Uakti. From his burial site, three palm trees grew, which kept his spirit alive.
The musical wind instruments the Tucanos made from the palm trees reproduced the Uakti sound. This painting is how I imagined Uakti might have looked.
Posted by Unknown at 5:50 PM No comments: 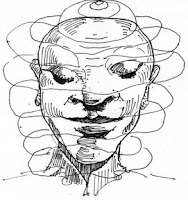 No artists I know are able to go into their studios and instantly produce art on demand. There is usually a period of time in which they resort to various tactics to jump start their creativity. This can be something as simple as sweeping out the place, or a more inner directed practice like meditation. Only then can they begin the serious business of making art.
I'm a lifelong doodler, a trait that's gotten me bounced from more than one menial job. Nonetheless, early on, I realized the importance of this seemingly innocent habit, and now use doodling to first get going in the studio. I often begin the creative day doing quick gestural drawings for an hour or so, after which time the ground has been prepared for more imposing work to come. I call this exercise "warm-ups," and above is one I completed this morning.
Posted by Unknown at 6:08 PM 4 comments:

One of my favorite English films is the odd 60's release, Wicker Man, that became a minor cult classic, and spawned a recent inferior version starring Nicholas Cage. The original had Count Dracula himself, Christopher Lee, and centered on some pagan folk who lived on an island off the coast of Scotland. A young girl went missing and a devout police inspector goes to the island to investigate. That's when the weirdness begins.

For me, the most arresting image of the movie is the final scene of the burning wicker man. That scene stayed with me for years, and re-emerged as I worked on pieces for an exhibition in 2004. The theme of the show was the body as a vessel, in both a literal and metaphorical sense.

The original movie played up the conflict between Christianity and paganism, but my interest lay in the transformative power of fire. With that in mind, I painted Wicker Man.
Posted by Unknown at 10:02 PM No comments: