Sunset and a Blank Canvas 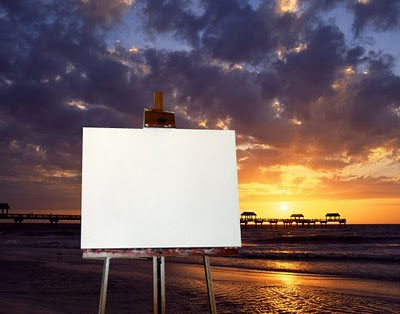 How should artists respond to events in the world around them? Do they have a responsibility to use their art to promote a better society? And, if so, don't they run the risk of creating grand politicized artifacts?
Pablo Picasso was not an artist who painted causes, yet, arguably his greatest work, Guernica, came about as a reaction to the 1937 Nazi bombing of the Basque city. Guernica is an awe inspiring painting, but it did little to halt Spain from becoming a fascist state from 1939 until the mid-1970's.
Picasso had an immediate and profound reaction to the bombing. It could be said that all artists create in reaction to something. They cannot help but experience the world and those internalized experiences are later expressed in works of art.
Great art is even created in reaction to other art. The advance of Pop Art in the 1960's came about in opposition to Abstract Expressionism, the art movement that proceeded it. Pop artists immersed themselves in the popular culture around them and disdained what they saw as out-of-touch and overly emotional action paintings.
Right now, events around me swirl out of control. How shall I respond? In the Gulf of Mexico, a huge natural disaster is taking place. Last week an oil rig leased to British Petroleum exploded, burned and sank. Most workers were saved, but, sadly, eleven others were lost and feared dead.
Crews have been unable to shut off the oil flow and 5,000 barrels a day continue to gush into the water. A massive oil slick formed and is coming ashore in Louisiana, Mississippi, and Alabama.
This environmental destroyer is heading for the beautiful beaches and estuaries of my state of Florida.
In South Florida, three hours away, lies the vast and mysterious River of Grass, the Everglades. Since the 1920's, opposing forces have been battling over the fate of this unique wetland. Developers, on one side, look at the area and see dollar signs. They have drained thousands of acres for homes, businesses, and agricultural tracts. It is not enough and they are seeking more land.
On the other side are those who want to keep and protect this natural wonder and the plants and animals that live there. Caught in the middle of this tug-of-war is the Florida state animal, the panther. A cousin of the mountain lion, this shy elusive creature has suffered greatly from habitat loss and contact with humans. As a result, there are estimated to be only 100 wild panthers left. In my lifetime, there may be no more panthers in the Everglades.
My response to these disasters has been a creative drought. Yesterday, I could only retreat under a favorite tree and try to wait it out. The shifting sea breeze brought an oily kerosene smell from the Gulf - the sharp smell of doom. Returning to the studio, I tried again to paint, but it was no use. Inspiration had been pushed aside by despair.
Today, surrounded by blank canvasses, I can only wait as the sad calamity comes this way.
Posted by Unknown at 11:28 PM 4 comments: