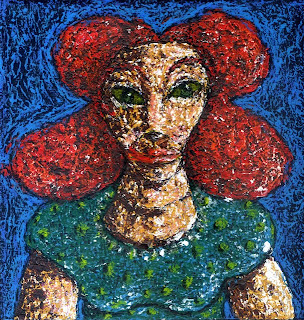 Living life is often a scary proposition and the artist's job is not to turn away from the unpleasant stuff we come up against. Grab hold of the fear and loathing and force them into one's visual vocabulary. Lately, the results for me have been a kind of Fu-Lion art.

Many Chinese temples are guarded by two fearsome Fu-Lion statues. Their purpose is to keep out demons, the bad guys who continually try to force us off the path. Fu-Lions also give people the opportunity to call up and examine their own fear and anger.

Pictured above is a new work titled Red Tara, a Fu-Lion figure of protection. It is a mixed-media piece on masonite and will be included in an upcoming exhibition. 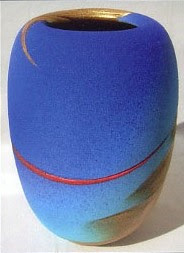 The exhibition, called Perfectly Imperfect, will he held at The Painted Fish Gallery in Dunedin. I am pleased to be showing with master potter Yasuko Nakamura, whose beautiful ceramic vessel Love Like Wind is pictured at left. 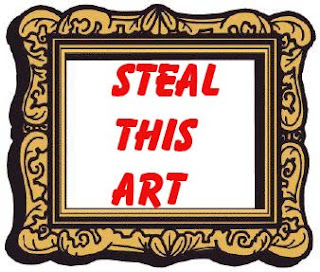 Authorities recently recovered a painting by Swiss artist Paul Klee, stolen in 1989 from New York’s Marlborough Gallery. After so many years, a Florida art dealer attempted to sell the painting, Portrait in the Garden, to a Montreal gallery.

High profile art thefts are almost always done for the money and almost always fail. It becomes nearly impossible to move big ticket art works, as the above story illustrates, even after 20 years. They are too much in the public’s consciousness.

But what of lesser known artists? Are their works often stolen and for what reasons? I suspect less well known works of art get pinched for those typical human conditions – jealousy, revenge, greed, and even love.

This type of art thief must love the work very much to go to the extreme of stealing it. They would be taking a huge chance of getting caught with the unpleasant prospect of landing in jail. Minus the stealing part, these are just the kind of people artists dream about.

In the mid 1970’s, I participated in the first Piedmont Park Art Show in Atlanta. My booth consisted of one odd little piece titled Electric Lick, an animated sculpture featuring a rubber tongue. Returning from an afternoon food run, I was surprised to discover an empty pedestal. The sculpture was gone. Who rips off art I complained to show organizers. They both agreed it must have been someone who really loved the piece.

After I cooled down and had time to ruminate on it, I realized the Piedmont ladies were right. That reassuring thought was some consolation to a lost weekend of browsers and no sales.

A couple of weeks after the show, I returned home to find my apartment had been broken into. The back window was forced open and muddy footprints covered the floor. Searching everywhere and double checking hidden valuables, I realized not one thing was missing. Someone had broken into my wonderful apartment filled with fabulous art and found nothing worth stealing.

How dare them! It could only have been some low-life punk completely devoid of good taste. Sitting on my Day-Glo yellow designer bean bag, I stared at the still empty pedestal and remembered the Piedmont Park art thief. “Why couldn’t it have been him! He at least knew great art!”
Posted by Unknown at 7:52 PM No comments:

A Question Of Perception 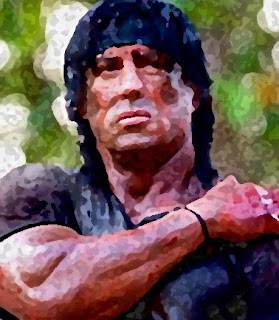 Man walks up says, Saw you in the newspaper again, you're big-deal famous now, must be makin’ a ton of money too huh?

Yeah, probably way outa my league. I could maybe afford the frame. Say, what kinda art you do anyway? You a painter? My wife's cousins a painter, yeah, damn good one too, she sold one of those, whaddia call em, still lifes, yeah, sold it to the mayor's wife up in Toledo. So, you paint still lifes?

Drawer! Whazzat? Like what my kid Joey does, with crayons 'n stuff? Hey, you shoulda seen the picture Joey did the other night, picture a Sylvester Stallone. Looked just like him too. Wife put it on the fridge, says he's gonna be another Michaelangelo. . . . . or maybe famous like you. Hey look, do me a favor will ya? Draw me a quick picture, nothin’ fancy, jus' somethin’ I can give Joey, a picture from a famous artist. Boy will he be surprised. Here's a pen and paper, come on, whaddia say?

"Sorry, I don't do that kind of drawing."

Say listen, I’m an art collector too. Yeah, I got fancy dinner plates with pictures of the presidents painted on ‘em. So life like they are! When the mother-in-law visits, I always give her the George W. Bush plate. Say, what’d you say your name was?
Posted by Unknown at 9:36 PM No comments:

Art To Brighten Your House 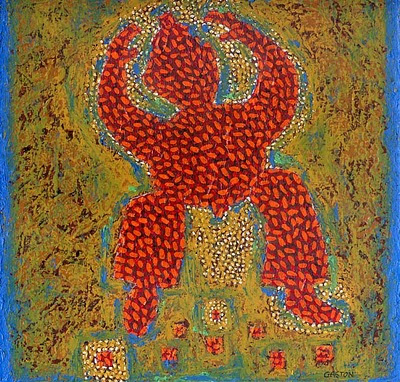 For the next six months I will be showing twelve mixed-media paintings in this extensive exhibition space. Six of the pieces are new oil and pastel paintings on masonite, such as the above work titled Little Boxes. All works are for sale.

Bright House is located in the Carillon office park at Roosevelt Boulevard and 28th Street near Feather Sound.
Posted by Unknown at 10:31 PM No comments: