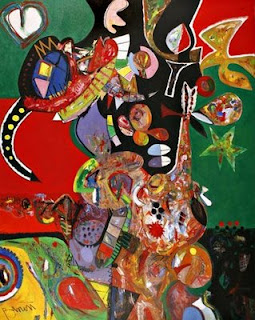 In 1984 I moved back to Florida with the idea of finding employment in graphic design, the same kind of work I had done for fifteen years. Daily I scoured the St. Petersburg Times classifieds in hopes of landing a lucrative job I felt I richly deserved.

My searches were in vain, but I discovered something else that would be just as rewarding. It was there in the Times I began seeing the wonderful art of Jack Barrett, first in small spot drawings and news features and later in full-color illustrations.

Jack’s work made an immediate impression, being neither cartoons nor generic clip art, but a style quite different. His bold figurative drawings demanded attention and I realized here was no mere illustrator but an original artist.

Jack retired from the Times in 1989 to pursue fine art full time and his paintings began showing up in gallery exhibitions. His was a rich painter’s vocabulary, and no matter the style, from meticulous realism to loose expressionism, Jack’s vision always shone through.

Over the years, Jack stayed true to the belief of the artist as storyteller, and to his credit his narrative paintings never give anything away. They, instead, pull the viewer in and allow them to become part of the story. His art retains mystery and freshness on the fourth viewing or the fortieth.

Jack passed away in February of this year and The Arts Center in St. Petersburg has mounted a large retrospective, Jack Barrett: A Soul's Journey. This week I had the pleasure of viewing the exhibition with curator Amanda Cooper, who shared insightful stories of Jack and his art making.

Of particular interest is a wall size display of a small portion of Jack’s many sketch books. Standing in front of this time line of masterful gesture and spontaneity was an awe inspiring experience.
Posted by Unknown at 10:19 PM 1 comment: 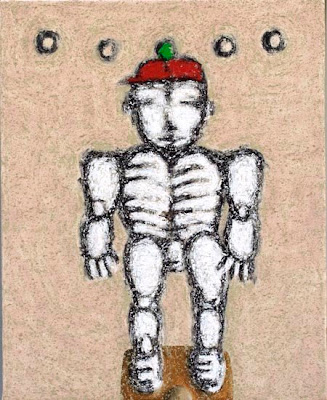 This is a recently completed mixed-media painting titled The Jockey. It is one of a new series called "Eikones" (Icons), heroic portraits of familiar figures, in this case a jockey. I will be exhibiting this and six other iconic portraits at Dunedin Art Harvest, November 1,2. If you would like to get a sneak preview, please contact me at mrcoolink@ij.net or 727 733-1688.