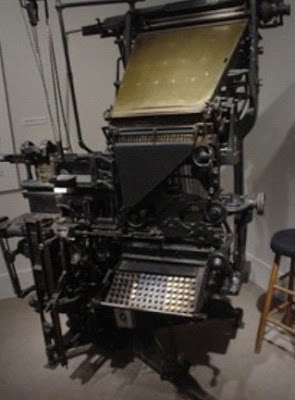 From 1969 until 1983 I lived in Atlanta and made somewhat of a living as a graphic designer. My loner temperament would not condone the 9-5 workaday world, so most of my time was spent doing free-lance work.

The city was awash with hot-shot designers during the '70's and us free-lance folk could not afford to be choosy with jobs. During my years there I designed display windows, television props, newspaper and magazine illustrations, gift catalogs and logo designs,

One of the more interesting jobs turned out to be doing the paste-up for a monthly magazine called "Army Aviation Digest." A paste-up involved taking the various elements of a magazine; type, photos, illustrations, and ads, and making them camera ready before being printed.

Everything was straightforward except the magazine's body copy which came from the last of Atlanta's hot type shops. This old school method produced metal type from molten lead on a Linotype machine. I was able to see the machine in action several times and the sights and sounds of the hulking beast reminded me of some Rube Goldberg contraption.

I knew I was looking at a machine that had somehow escaped the hot type mass extinction. Quick and clean photo type had finished off the others years ago. And photo type would be eclipsed in turn a few years later by super fast computers. In mass communication change is the only constant and I felt fortunate to get a glimpse of the last of a gone-by era.
Posted by Unknown at 10:18 PM No comments:


My father, Richard Gaston, was a mapmaker by trade and an artist by spirit. He loved Kandinsky, the German abstractionists and Surrealism. He considered himself a serious painter, but never made much money from his creations. In his life time he painted less than a hundred pieces.

If someone expressed interest in a painting, my father often gave it to them as a gift. For years I marked this down as a character flaw; the insecurity of a part-time painter. And it took years to realize my mistake.

Recently, going through his things, I was surprised to discover a record of all his art work. The list, hand written in his distinctive style, began in the 1940's and included titles, dates, media, and prices. After some works were the names of  people who had purchased them. There was a doctor, a printer, and several business associates. Other paintings were given as gifts and even bartered.

I've come late to the realization that an artist's worth has little to do with their sales record, except in the market place. And the market place can be as insecure as a pampered Rock star. More important is the ability to see beyond the thing created and realize it does not define who we are. That is a good definition of an artist very secure in what they create. And it becomes another lesson given to me by my father.