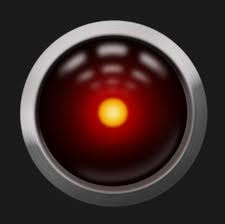 It was just one of those simple Facebook tasks, something I had done hundreds of times before. But this time, when adding my comment to a lengthy and serious discussion about who died first, Richard Nixon or his dog Checkers,* this time, as I typed in the friend's name, a drop-down box opened and Facebook tried to enter another slightly different name. Each time I deleted that name, Facebook would re-enter it.

The site seemed to be attempting to anticipate the friend's name before I typed it. Oh my God, Facebook was trying to read my mind! Finally, exponentially, those billions and billions of Facebook algorhythms had achieved the ultimate state of consciousness- human sentience.

In this version of the film, I am Commander David Bowman trying desperately to shut down Facebook Hal before it eats my lunch and empties my bank account. Over and over I keep mumbling, "Sing "Daisy, Daisy," dammit!"

* Richard Nixon passed away April 22, 1994. His beloved Cocker Spaniel Checkers preceded him in death by 30 years.
Posted by Unknown at 8:15 PM No comments: