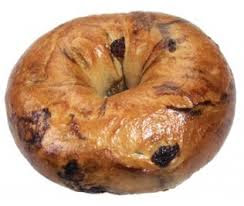 Forgive my haste but I must get to the meat of my story straightaway. It is starting to rain here and soon they will come for me.
As you know, few things arouse my passion as does big game hunting. I have been called cold, even ruthless, by certain Club members but it could only be true passion that would pull me halfway round
the globe to this damned red clay region. And that, old friend, would be the passion of the hunt!

I had been outsmarted in Shanghai and bloody careless in Benares, but by God, it would not happen here! I had hastened all the way to Georgia in America to hunt and slay the fierce Raisin Bagel.

To appreciate the challenge, one must first consider the catch. The Raisin Bagel, at first glance, appears like its close cousin, the Common Rye Bagel. They are the same size and texture and both are rather cinnamon-like in color. But there all similarity ends.

The Raisin is much more elusive, lurking in mucky places or hiding near larger game. You will recall, Alex, I bagged my first Raisin found cooling off with a herd of huge Bialys. Though small in stature, the Bagel is a born fighter and the Raisin especially can be ferocious when cornered. To approach one bare-handed is asking to be burned. Most chaps never get that close, however. Bagels can hear even small people in the next room and will quickly fade away. Stealth is called for. Stealth and a large helping of patience. The best rewards come to those who wait and it is true also with the wily Bagel.

But I digress. Shortly after my diminutive man-servant, Seymour, and I arrived in Atlanta, we began hearing promising reports. Hikers had recently spotted a trail of caraway seeds in a suburban park. And later, people reported smelling onions and chives near an ethnic deli. It all sounded quite extraordinary and with rising excitement we hailed a cab and hurried to the area.

After scouting the lay of the land, Seymour and I began our own sleuthing expedition. With eyes wide open and following our noses, we slowly made our way through fen and forest. No garbage can or trash bin was left unchecked. Finally, by mid afternoon the trail had led us to a posh Georgian manor house nestled amongst Dogwood trees. Looking all about, we quickly deduced that no one was home. Seymour, alert as ever, noticed a side door ajar. Mind you, I’m not one to enter homes uninvited but dammit man, this was possibly my last chance to nab a Raisin Bagel. We snuck inside.

I motioned for Seymour to check the back side of the home for more clues. I parked myself behind a china cabinet in the hallway and waited and waited.  After an hour of that nonsense, I thought about chucking it all. Suddenly, trusty Seymour, rounded the corner quite out of breath. He had spotted fresh tracks on the terrace and there was still cream-cheese on them. We were closing in. Silently, we dropped to our bellies and inched our way down the hall to the parlor sofa. Crouching behind it, I ever so careful peeked round and nearly dropped my monocle. There on the dining room table, close by the preserves, sat the largest bag of Bagels I had ever seen. Heat shimmered off the brown expanse of paper. The aroma was quite overpowering. My heart pounded. Sweat rolled off me. Could it be possible! Might there be one or more Raisins nestled among the Garlics and Pumpernickels?

While relishing the possibility, I flashed on old Freddy Dinsmore, asleep by the fire back at the Gastronome Club. Freddy had hunted all his life; nothing could elude him for long. Fearless Freddy you called him. He was the only one of us to ever bring down the nocturnal Cheese Blintz. One night, in his cups, he confessed how he had lied, how one trophy had always eluded him. He had never bagged a Raisin Bagel. Now here was I with perhaps a whole bag of them not fifteen feet away. Poor old Freddy!

Enough! It was time for action. I motioned for Seymour to circle downwind the bag while I tried a ploy the natives sometimes use. On my signal, Seymour began whispering in Yiddish from behind the pantry door. Instantly, the bag seemed to move round in that direction, as if listening.

That was it! No time to dally! Go! In a wink I charged, knocking over a parlor chair in the process. Reaching the table's edge, I grabbed the still warm bag before any wee beastie could escape. Quickly glancing inside, I spotted a beautiful cinnamon Raisin hiding on the bottom. I raised my fork high and brought it down again and again!

Seymour entered the dining room smiling broadly. Then holding up our prize, I announced,  “What say old fella’ to some hot Bagel and a smear?”


Your devoted pal Nigel
Posted by Unknown at 5:42 PM No comments: