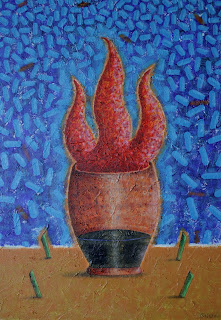 I recently completed this small painting, the first since a devastating fire last December destroyed my studio and most of my art work. Going through the rubble one day, I was surprised to discover a favorite tea cup sitting alone atop the charred remains of my desk. In awe that anything had survived the inferno, I carried the cup home and placed it on a shelf with other pottery.

After a few days of enjoying its refired beauty, I decided to test the cup's major function, holding tea. Hot water pooling on the counter told me it had not come through intact.

I brought the cup with me when I finally moved into a new studio. More than anything, I wanted to again make art, but grief became a roadblock against inspiration. Staring for long periods at the stout container that accompanied me through many creative journeys, I longed for a hot cup of tea. And so, slowly at first, savoring the process, I began to paint.
Posted by Unknown at 6:09 PM 1 comment:

Woman In The Garden 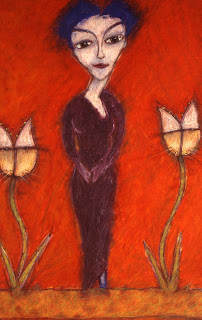 I posted this piece as an example of an early oil pastel painting, but it looked lonely without a block of copy nearby. A story was called for. But to do that I must peel back a layer of the artist's unseen past. Here then is the story of a woman in the garden.

From an early age I've been fascinated by dark mysterious women from exotic locales; the coffee lands, chocolate lands, and olive-colored ladies from the Mediterranean. I kept travel magazines in my bedroom and looked at them over and over, transfixed by the beautiful women from far away places.

And just like that, those women began appearing all around me, starting in elementary school and continuing up to the present. Dark eyed beauties all, they possessed a certain magnetism that drew me near, but one glance my way and I instantly turned to tahini. Where in the world did these girls and women come from? Had I invented them?

Later, they even began appearing in my art, and always in unusual circumstances. Thus, in response to a woman I knew, I created Woman In The Garden. No other art work has had such an effect on me, and to such an extent that I felt compelled to get rid of it. I did not even feel right taking money for the piece, and eventually gave it away, very unusual for a working artist. Those menacing flowers in the painting are Venus Fly-Traps.
Posted by Unknown at 7:55 PM 2 comments: